Protecting your health from COVID-19 SEE HERE FOR INFORMATION

LA Lipo
Hifu Before And After

Hifu Before And After 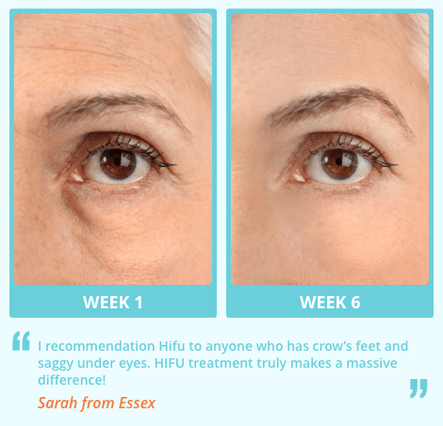 Essex born-and-raised Sarah was naturally very sceptical about the apparent effects of HIFU, given her more holistic approach to health and life in general.

Thankfully she decided to give LA Lipo a try, extending to us a chance to really blow her away with the results and that’s exactly what we’re proud to say we did!

Sarah’s case was centred on the corners of her eyes in particular, posing a little bit of a firmer challenge than the regular areas of concern, like wrinkles and expression lines.

By default, what are known as crow’s feet (the wrinkled corners of the eyes) bear furrows that make the appearance of the wrinkles appear a lot deeper, but it was even worse for Sarah because she was also self-conscious of the sagging bags under her eyes.

It was really a case of hoping for a miracle, by her admission, but to her surprise, Sarah started seeing a massive improvement having only undergone the first of a few treatments she would have to come in for.

She reports staring into the mirror and resisting the urge to constantly touch her face to see if her fingers tell the same story of just how much firmer her skin looks and feels.

Sarah’s was one of the more severe cases LA Lipo’s HFU treatment rather impressively triumphed over, with the wrinkles she had having appeared deeper and more pronounced as a result of spending lots and lots of time out in the coastal Essex sun. 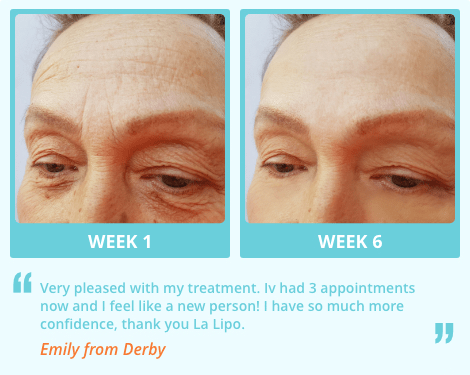 Emily found it just a bit too much to handle, having to deal with a plethora of the visible signs of ageing, so she decided to try and tackle the biggest area of concern first, which is the face.

One can otherwise always attend to greying hair with some dye, but when it comes to your face, the tell-tale signs of someone who is getting on in the years always make for the first focus of an onlooker’s eyes.

The 55-year-old from Derby is young at heart, something we picked up on in our very first consultation and treatment session with her, so the cause for concern made perfect sense. She came to the right place to take advantage of the HIFU treatment we have on offer, here at LA Lipo.

A mere three appointments later, Emily looks as young as she feels, if not even younger! In fact, the post-treatment picture she has, would have had some of the closest people to her fooled into believing that it was taken a lot earlier in her life, were it not for the physical proof she can now confidently provide in the flesh.

The matriarch’s facial wrinkles are almost completely non-existent following the procedure and we’ve been wondering how much longer we’re going to keep getting messages of gratitude from her…Not that we’re complaining at all! Check out our blog post on fat freezing!

Specific areas targeted were the eye-lids, which have since been filled out and tightened, while the vertical frown-lines have completely disappeared along with the horizontal ones that were clearly visible on her resting face. 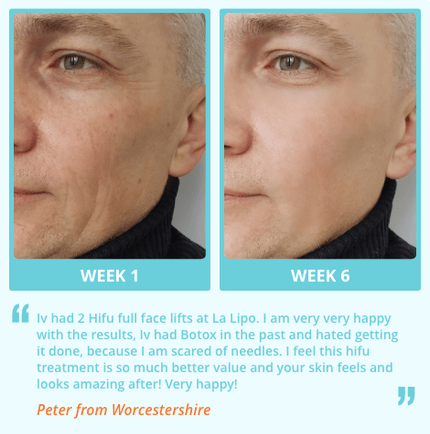 49-year-old Peter, from Worcestershire, had quite a long history with other facelift procedures before coming to LA Lipo for HIFU , having previously had Botox done.

The results attained only demonstrate the flexibility of the treatment and just how unaffected it is by previously completed procedures such as Botox, but it is important for us to know of any such treatments the client may have had done in the past. Click here to see more about us!

It’s all part of the consultation process though, aiding in the process of determining what the best way forward would be for the client with regards to dynamics such as how many sessions would be required, the intensity of the treatment, targeted areas of focus, etc.

Peter’s case was quite the delicate one because this is a gentleman who at 49 years of age, was about to cross a very important milestone of life – the magical number 50!

So it was a matter of correcting what had become the overcompensation of someone who decided to lay off on the Botox a bit, mostly out of the fear of repeatedly having to endure the invasive nature of the needles with which the Botox is administered. Click here to see why you should try us!

Before coming into LA Lipo , Peter was worried about how quickly the effects of no longer getting Botox regularly were beginning to show up on his face.

With only two full HIFU facelifts, Peter boasts about how he can convincingly pass off as someone who is not anywhere near reaching the 50-year threshold, citing how great his skin feels to mirror how it looks. 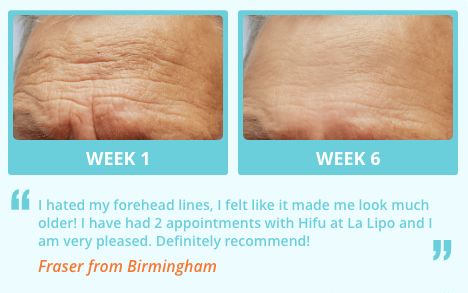 59-year-old Fraser, from Birmingham, may be close to his retirement age, but his coming to LA Lipo for the HIFU treatment he’d heard about represents his young spirit, which is nowhere near ready for retirement.

The seasoned veteran of the corporate world is a very expressive character and so the frown lines all across his forehead represented a skin-level, visible part of his inner-character that would be lost to the world if these frown lines were to completely disappear.

That’s the exact reason why it was mutually agreed between ourselves and Fraser that he’d best go for a HIFU treatment option that is not quite as intense as that which someone seeking to look decades younger would go for.

A couple of appointments were enough to account for Fraser’s utter satisfaction, with the main “character-expression” lines still faintly visible so as to maintain the representation of his character and wisdom, while the nasty, two-tone clustered wrinkles have been done away with.

Click here to read about more on what we do!

LA Lipo Ryton-on-Dunsmore speciality with HIFU is indeed to restore the appearance the client feels best fits how they feel on the inside and dare we say, we’ve proven at times to go beyond expectations in managing to shave off what looks like up to a decade or two in the telltale signs of ageing on the face.

Clients like Fraser are often surprised at just how quickly the results start to show up positively, especially considering just how non-invasive the HIFU procedure Ryton-on-Dunsmore is. Click here to see why you should choose us!

We totally understand how lively gentlemen in the like of Fraser are not quite ready to take up their place as silver foxes as yet and LA Lipo can play a huge role in delaying that dreaded progression. 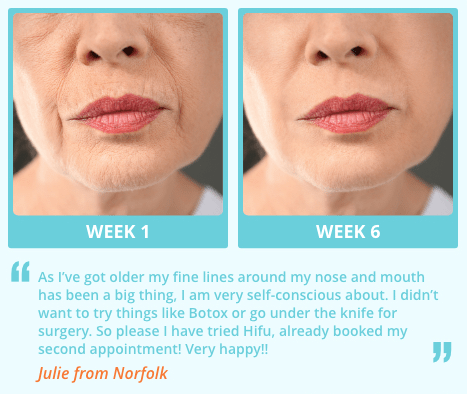 Although we delight in sharing the great results with all of our clients who have come to LA Lipo for the Hifu treatment, Julie’s case particularly stands out because it strikes at the very heart of what High-intensity focused ultrasound (HIFU) is all about.

In some of the earliest experimental and trial phases of HIFU’s development and implementation, Julie’s targeted areas for the treatment were noted as the most effectively treated.

Julie, who hails from Norfolk, came to LA Lipo for a HIFU treatment that would not only have her appearance improved visually, but would also have her feeling “like my skin still actually belonged to me,” as she put it.

Julie specifically noted how the skin around her nose and mouth wasn’t only seemingly ageing and wrinkling faster than the rest of her face and body, but was also starting to feel a bit too loose and unusually soft.

The jaw-line along with the cheek are indeed those areas where HIFU’s visible results mirror the effectiveness of the treatment in decreasing order.

Less-effective definitely doesn’t mean not effective – there are just some areas where HIFU hits a clean home-run, as was the case with Julie’s nose and mouth region.

Julie was particularly pleased to be part of an effective treatment process that isn’t invasive as getting surgery or Botox.

Hifu was good for me as i wanted to reduce wrinkles 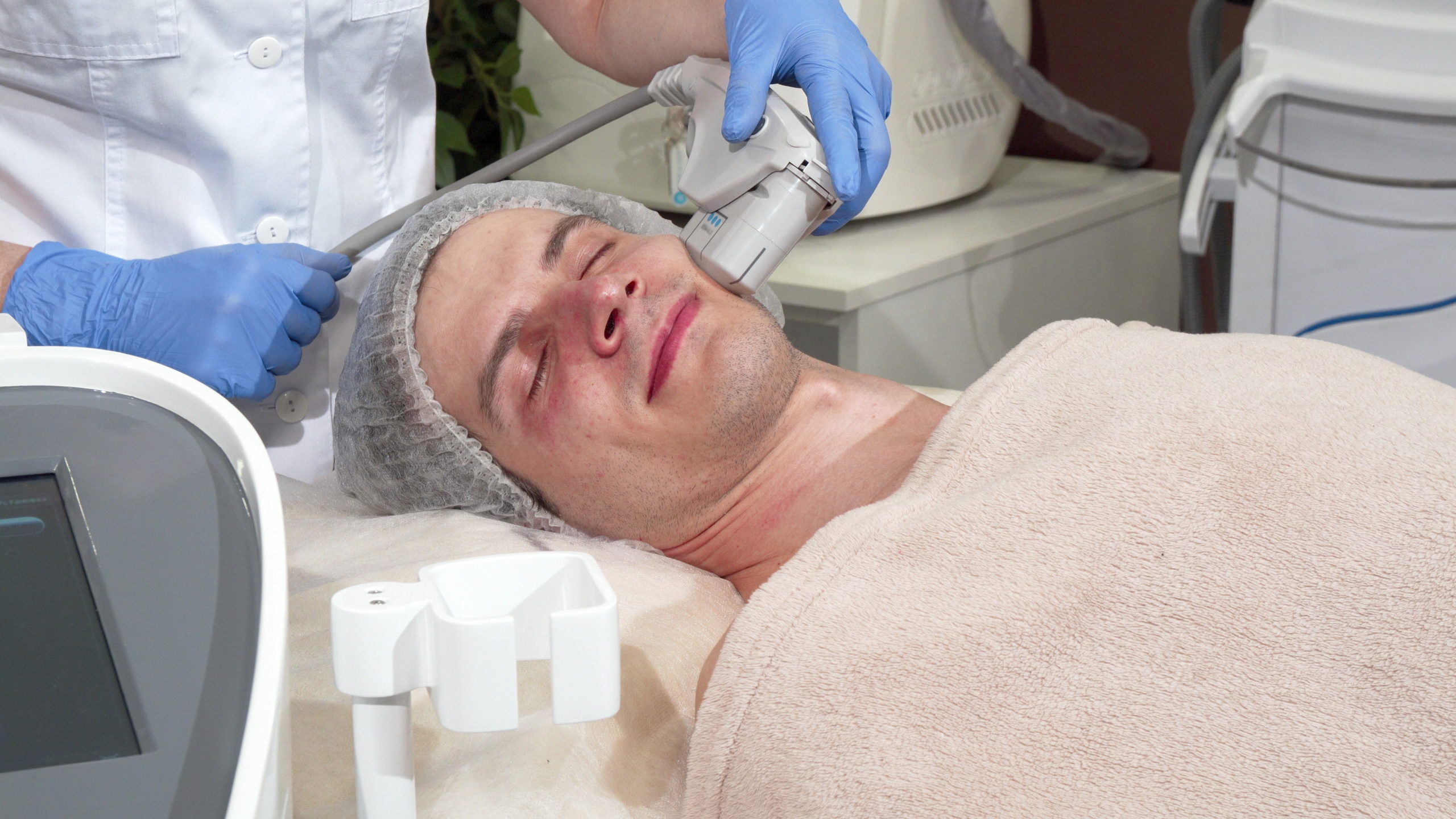